“Hope I die before I get old!” 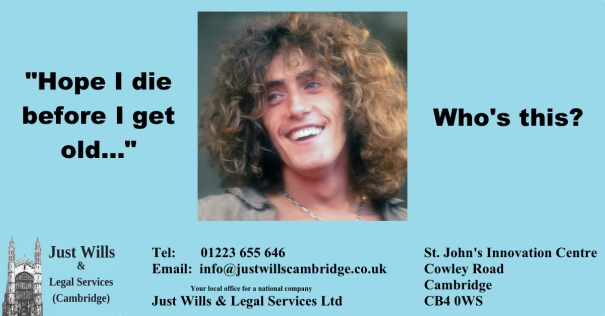 “Hope I die before I get old!” sang Roger Daltrey of the Who in the song “My Generation”. But he didn’t die. He turned seventy-three in 2016. And I’m sure he was glad to get there. Even if he was serious back in the 1960s, the older he got the more his views must have changed. He’s never stopped enjoying life and he probably wants to enjoy it for many years to come.

Perhaps he now hopes to live past a hundred. Many people do. Lots more of us are reaching that milestone. But not everyone wants to reach a great old age. Some researchers at Columbia University have recently completed a fascinating study into how long people want to live. They interviewed people by telephone, asking them about their present age, their race, their sex, their level of education, how happy they were and what they felt about old age.

What explained these differences? The sex of the interviewees and their level of education didn’t seem to matter very much. Race was more important: Black Americans were most likely to want to live a very long time – past their hundredth birthday. Conversely, people who weren’t very satisfied with life didn’t always want to live a long time. But when happiness was taken into account, one important factor seems to have been what the interviewees felt about old age. That is, what experiences had they had with old people?

The study concluded that two fears are in competition. People are afraid of dying, but they are also afraid of getting old and frail. Which fear is stronger? That question determines how long we want to live. Of course, not many people commit suicide while they’re young just to escape old age. But many people do seem to have a death-wish. They live dangerously, taking unnecessary risks or eating, drinking and smoking to excess. In some cases, they may be doing that because they want to leave the world early, even if they don’t realise it themselves.

Old age can be a difficult time, of course, but it’s not just life expectancy that’s rising. So is the quality of life for the old. Modern medicine and modern technology can ease many of the traditional burdens of age. So can modern ideas like funeral plans. In the past, many old people worried a lot about their funerals and how to pay for them. They had to save but sometimes they had to use those savings for other things, like paying for doctor’s help when they got ill.

Today a funeral plan means that you can save money by freezing prices now, even as funeral prices keep on rising year on year. You choose the kind of funeral you want, then pay a fixed sum and leave everything in the hands of the funeral plan provider.

No matter how long it is before you need to activate the plan, there won’t be any more charges. So you haven’t just arranged your funeral in good time and at your own pace: you’ve also found peace of mind in a fast-changing world.

Contact us to see how easy it is to sort out a funeral plan – meaning that your family aren’t faced with financial and organisational headaches at a difficult time for the family.

Remember, every month we check and compare prices from the top 12 UK providers of funeral plans. We check so our clients can choose the best deal for them.

CONTACT US so that we can help you and your family!

Outside of this area? Contact us and we will put you in touch with your local Just Wills & Legal Services consultant.